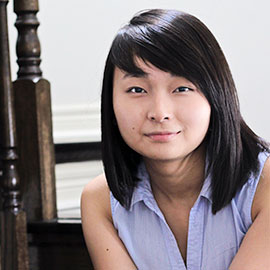 WATERLOO – As the winner of the 2014 Ken Murray Concerto Competition Award of Distinction, Laurier Music alumna and pianist Yvonne Choi (BMus ’14) will perform with the Kitchener-Waterloo Symphony Orchestra Feb. 3 at 7:30 p.m. at the Conrad Centre for the Performing Arts.

Since 2002, Ken and Marilyn Murray have presented the Ken Murray Concerto Competition Award of Distinction, a $5000 scholarship and the chance to perform with the K-W Symphony to a Laurier Faculty of Music student.

“I would like to sincerely thank Ken and Marilyn Murray for providing me with this remarkable opportunity,” said Choi. “Because of their generosity, I have been able to help pay for my education while being able to focus on my career as a performer.”

Choi graduated from Laurier in 2014 with an Honours Bachelor of Music in piano performance. Initially, Choi planned to study Music Therapy; however, with the mentorship of her studio instructor Leslie De’Ath and her love of performing, she was inspired to pursue performance in her second year.

Choi is currently working on her first album of solo piano works, while preparing to audition for her Masters in Collaborative Performance at McGill University and the University of Toronto.

The winner of the 2015 Ken Murray Concert Competition is Mason Pomeroy (flute). He will perform with the K-W Symphony in the 2015-2016 season.

Tickets for the Feb. 3 performance are $45 for adults and $10 for students and are available at the Conrad Centre Box Office or online at www.kwsymphony.ca. All proceeds will benefit the KWS Volunteer Committee.