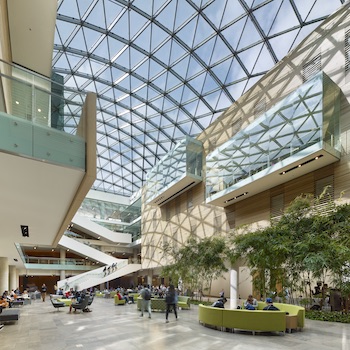 Waterloo – Wilfrid Laurier University’s Lazaridis Hall building, home to the Lazaridis School of Business and Economics and the Department of Mathematics, has been named the winner of a prestigious Civic Trust Award.

The Civic Trust Awards, based in the United Kingdom, are Europe’s longest-standing awards focusing on the built environment. Lazaridis Hall, designed by Diamond Schmitt Architects, is the only Canadian building and one of only two in North America to receive a 2018 award. Award winners will honoured at a ceremony in March in Manchester, England.

“We are very honoured that Lazaridis Hall has been chosen for this award,” said Mark Dettweiler, Laurier's director of planning, design and construction. “One of the project goals from the onset was to create an iconic building that would benefit not only Laurier but also the broader community of Waterloo Region. The Civic Trust Award represents international recognition that we have achieved that goal. I extend sincere congratulations and thanks to the entire project team, especially to the design team led by Diamond Schmitt Architects.”

“Lazaridis Hall represents a new heart of campus life and is designed with simple, strong forms that articulate a distinct presence both on the interior and exterior,” said Birgit Siber, principal of Diamond Schmitt Architects and project architect. “The university has shown great leadership by supporting sustainability initiatives including ambitious energy use reduction to meet the 2030 Challenge.” 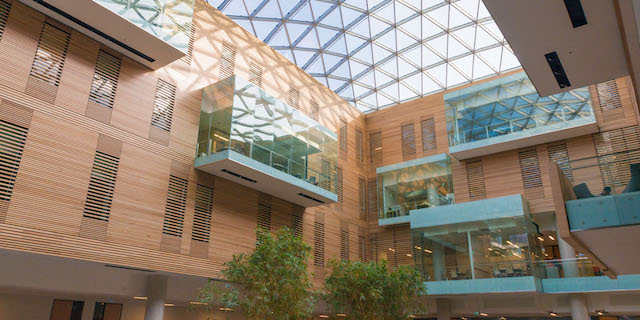 The 218,000-square-foot Lazaridis Hall held its grand opening in May 2017 and has been in use since September 2016. It has also won a number of other awards for its design and architecture.

In November, Lazaridis Hall won the Interior Wood Design Award from WoodWORKS, a program of the Canadian Wood Council. Lazaridis Hall features wood-lined spaces, including the building’s atrium, 1,000-seat auditorium and 300-seat lecture hall. Much of the built-in furniture also incorporates wood elements, including the continuous counters surrounding the atrium and a wall-mounted bench at the building’s entrance.

In October, the building won a Canadian Consulting Engineering (CCE) Award of Excellence. The structural consulting firm, VanBoxmeer & Stranges Engineering Ltd., had major structural challenges to overcome, including building large cantilevered spaces, a drum-shaped feature with few opportunities for vertical support and a large skylight, which may be the largest single-layer trussless skylight in Ontario, according to Canadian Consulting Engineer Magazine.

In April, Lazaridis Hall won an Award of Excellence from the Ontario Glass and Metal Association. Judges made special note of the “awe-inspiring curvilinear skylight” and the “transparency of the projecting glass-clad bays within the courtyard.” The building even won an award before its construction – an illustration prize for a watercolour of the original building design.

Lazaridis Hall is targeted for Leadership in Energy and Environmental Design (LEED) Gold certification and is currently going through the final assessment process, which certifies buildings designed and built to high standards of sustainability in energy efficiency and environmental and human health. 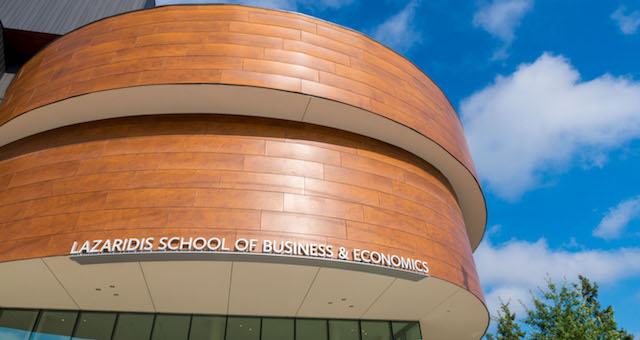 “It makes a statement about Laurier’s commitment to sustainability,” said Dettweiler. “We are looking to reduce emissions. It’s also a financial decision. You may pay a little more to build in energy-efficiency features but you get it back many times over the lifespan of the building.”

Lazaridis Hall cost $90 million to design, construct and furnish. The total project cost, which includes renovations to the nearby Peters Building, which formerly housed the Lazaridis School, is $103.7 million. The project was funded through grants from the Province of Ontario and the Government of Canada, as well as a fundraising campaign that included a substantial commitment from entrepreneur Mike Lazaridis.

The independent Civic Trust Awards aim to encourage the very best in architecture and environmental design; improve the built environment through design, sustainability, inclusiveness and accessibility; and reward projects that offer a positive cultural, social, economic or environmental benefit to their local communities.