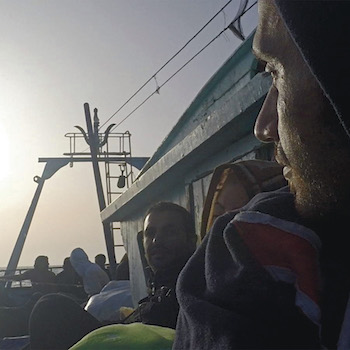 Waterloo – At a time when the world is witnessing the highest levels of displacement ever recorded, a Wilfrid Laurier conference will explore issues facing refugees, migrants, and the communities that host them. The three-day, three-location conference runs from March 30 to April 1. Tima Kurdi, the aunt of Alan Kurdi, the three year-old Syrian boy whose drowned body found on a Turkish beach shocked the world, is the conference keynote speaker.

The conference, to be held at Laurier’s Brantford campus, the Balsillie School of International Affairs, and Laurier’s Waterloo campus, is hosted by Laurier’s International Migration Research Centre (IMRC) in partnership with Wilfrid Laurier University's departments of Global Studies, Religion and Culture, and the Waterloo Lutheran Seminary. Ontario Lieutenant Governor Elizabeth Dowdeswell will give welcoming remarks on March 31.

“The conference will bring together scholars, students, refugees, artists, and community members to generate a multidisciplinary perspective and dialogue regarding the refugee and resettlement experience,” said conference co-organizer Carol Duncan, a professor at Laurier’s Department of Religion and Culture and IMRC research associate. “A particular focus will be given to Waterloo Region's role as a recipient of global migrants.”

Tima Kurdi will be speaking at the Centre for International Governance Innovation (CIGI) auditorium at 7 p.m. on Friday, March 31. Kurdi co-founded The Alan and Ghalib Kurdi Foundation in honour of her nephews to help children living in refugee camps by providing nutritious meals, clothing and medicine.

A screening of The Crossing, a documentary following a group of asylum seekers from Syria to Europe, takes place at 7 p.m. on March 30 at the CIGI auditorium, followed by a discussion with Beirut-based filmmaker George Kurian.

Panel discussion topics will include: community experiences of being a refugee, policy responses to the Syrian refugee crisis, gender and the refugee experience, African-Canadian and Indigenous perspectives on refugee issues, community-university partnerships for refugees, and local political responses to refugee resettlement. The last will feature government office holders including Waterloo Mayor Dave Jaworsky.

The conference will also have an arts component, with the launch of an art exhibit by Kurdish refugee children, performances by local singer-songwriter Alysha Brilla, spoken-word poet Tichaona EKhaya, the Goodhearted Women Singers/Mino Ode Kwewak N'gamowak, a drum circle, and a screening of the film I Am Rohingya, by Laurier graduate Yusuf Zine (BA ‘15, MA ‘16). There will also be a panel discussion on the role of arts and culture in resettlement and communicating the migration experience.

For more information and to register, see imrc.ca/uprooted.