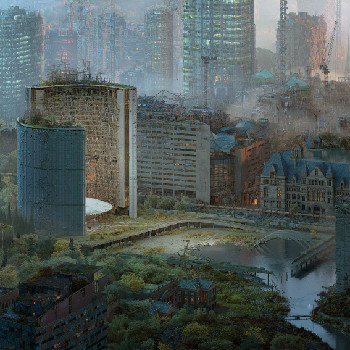 Biidaaban: First Light takes viewers to a future Toronto, where the city’s infrastructure has been reclaimed by nature and Indigenous language and knowledge survive. The interactive short film illuminates how Indigenous languages can provide a framework for place. As viewers move through a city overtaken by the natural world, they hear the languages of the original inhabitants of the place first known as Tkaronto.

Biidaaban: First Light was met with widespread acclaim when first released in Toronto during September 2018. “This virtual reality film is an incredible way to show our students and youth that Indigenous languages are still vibrant and visible,” said Bonnie Whitlow, Laurier’s Indigenous Initiatives special projects officer. “Particularly to Indigenous youth, it shows that incredible things come from knowing your language and it opens up a range of opportunities for them outside of the classroom.”

Whitlow’s voice is featured in Biidaaban: First Light. She is one of four people who narrate the Thanksgiving Address in the film, with Whitlow speaking Kanyen’keha (Mohawk).

Biidaaban: First Light will be shown from 8:30 a.m. until 4:30 p.m. on Jan. 28 and 29 on virtual reality stations in the Research and Academic Centre West lobby at Laurier’s Brantford campus. Those interested in viewing the film must pre-register for a 10-minute viewing time slot. The registration deadline is Jan. 25.

To complement the viewing opportunity, the film’s director, Lisa Jackson, and narrator, Tehahenteh Frank Miller, will discuss the impact of language on Indigenous youth during a panel discussion on Jan 29. The event is open to the public and will be held at the SC Johnson Building, Room 127, starting at 6 p.m. Admission to view Biidaaban: First Light or attend the panel discussion is free.

For more information and to register visit wlu.ca/biidaaban. Visit nfb.ca to watch a trailer of Biidaaban: First Light.