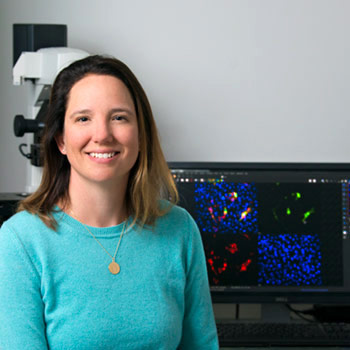 Waterloo – Shrimp farming is a growing industry in Canada and around the world. However, shrimp can be vulnerable to viruses that can decimate entire populations, causing huge economic losses. Now a team led by a Wilfrid Laurier University researcher is working to prevent mass shrimp die-offs.

Associate Professor Stephanie DeWitte-Orr, a member of Laurier’s departments of health sciences and biology, is principal investigator of a three-year project that has received nearly $720,000 in funding from the Strategic Partnership Grants program of the Natural Sciences and Engineering Research Council of Canada (NSERC).

“Shrimp is a huge aquaculture market worth billions of dollars a year and producers lose a substantial amount of shrimp every year due to virus infections,” said DeWitte-Orr. “Currently there’s no way of combatting these infections. You can’t vaccinate a shrimp.”

The virus DeWitte-Orr and her team are studying is white spot syndrome virus, which is lethal to shrimp and highly contagious, particularly at the high population densities typical of shrimp farms.

“One of the challenges of this virus is that it can reside in a shrimp population at an undetectable level, so it’s difficult to ensure that a population of shrimp you might be importing as breeding stock is pathogen-free,” said DeWitte-Orr. “Your shrimp can be completely healthy one day and the next day, the whole tank is dead.”

Shrimp pathogens have a major environmental, as well as economic, cost.

“If you get a virus infection in a pond, you can never sterilize that pond,” said DeWitte-Orr. “So you have to just get rid of that pond and dig a pond somewhere else.”

Shrimp aquaculture is increasing in Canada in part because of concerns about the sustainability of shrimp farming in other countries. That’s why DeWitte-Orr and her colleagues from across Canada are working with industrial partners, such as Planet Shrimp and Glysantis, a subsidiary of Mirexus Biotechnologies, that embed sustainability into the core of their work. The goal is an antiviral treatment for shrimp that relies on a plant-based nanoparticle as a carrier.

“What we’re doing is introducing double-stranded RNA with the white spot syndrome virus sequence into the cell,” said DeWitte-Orr. “So if that cell ever ‘sees’ that virus, it’s already got its sensing mechanism ready to shut the virus down. This works much better in shrimp than the type of vaccination you would use in a mammal or bird because shrimp don’t have the same kind of immunological memory.”

The process is designed to be safe and sustainable.

“The nanoparticle is biodegradable and non-toxic,” said DeWitte-Orr. “As for the nucleic acid, you eat nucleic acids all the time. So, in principle, there’s nothing that would be a risk to the consumer, though of course you’d have to demonstrate that before anything went to market.”

DeWitte-Orr, who won a prestigious Early Researcher Award from the Ontario government in 2016, as well as a Laurier Early Career Researcher Award in 2018, has researched innate immune response in other organisms, such as fish and frogs. Shrimp, however, are new to her, which is one reason she has assembled a multi-institutional team, the core members of which are:

“Shrimp are really understudied, which is shocking because they’re worth so much money,” said DeWitte-Orr. “Even if, for some reason, we pull this all together and it doesn’t work the way we think it will, we’re learning so much about shrimp biology and pushing that field forward with very high-tech, cutting-edge techniques.”

It may still be some time before shrimp protected using this method make it onto dinner plates, in part because the initial cost would be high. However, the process could be applied to other viruses and other organisms, which would drive down the cost.

“The beauty of this is model is that you can use it against any virus or any pathogen,” said DeWitte-Orr. “It’s exciting to feel like you’re doing something that could have a major global impact.”