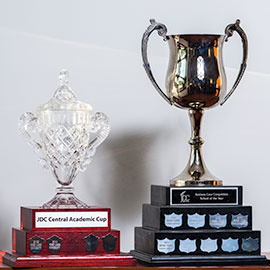 In an incredible sweep, the Laurier JDC Central team has once again won the "School of the Year" title for an undefeated sixth year in a row, and the "Academic Cup" for a fourth consecutive year, at the JDC Central competition.

"We couldn't be prouder of the effort and dedication our team has put in over the past four months," said Michelle Morin, student co-captain of Laurier’s JDC Central team. "To see it pay off with our sixth win is indescribable."

In the 6 years since JDC Central began, Laurier has remained undefeated. Four years ago, the Academic Cup was introduced and Laurier has dominated that championship as well. The JDC Central competition was held from Jan. 30 to Feb. 1, 2015 in Toronto, and was hosted by the Canadian Association of Business Students.

Read the article in The Globe and Mail.