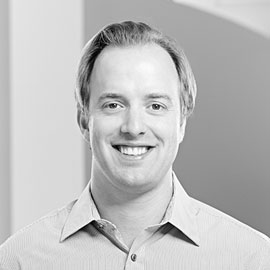 Securing $8 million in Series A funding from a top Silicon Valley firm is an impressive feat for the most seasoned entrepreneurs.

But Blair Livingston (BBA ’11), founder and CEO of Toronto-based Street Contxt, has reached that level at the age of 26 by solving a key problem for those working on Wall Street.

For brokers, accessing and sifting through a vast amount of trading data and analysis can be an almost insurmountable feat. Enter Livingston, who saw an opportunity to address this issue during his tenure at RBC Capital Markets and IEX Group, Inc.

“Wall Street is two things: helping clients decide what to buy and helping them buy it,” said Livingston. “What we’re doing is helping brokerages publish all the research content – the analyses and commentary – a lot smarter.”

Livingston’s idea was to use technology to help institutions mine through all the data to find the best and most relevant analysis for their portfolio. Street Contxt provides them with a communication platform for commenting on capital markets. The accessibility and simplicity of his program is beginning to transform how business is conducted across the globe.

Using Street context, brokers will not only find content more easily, but the platform will also tell them what content is worth their time.

Through the co-op program, Livingston sampled the business world through stints at accounting firms, sales and marketing agencies, and finally, at RBC where he found his post-graduation job.

After working for RBC Capital Markets, Livingston secured a position with fellow Laurier alumnus Brad Katsuyama (BBA ’01), co-founder of IEX Group, Inc. and a central figure of Michael Lewis’s bestseller Flash Boys: A Wall Street Revolt. It was here that Livingston deepened his love of finance and research.

Livingston soon realized the potential for a program like Street Conxt and committed himself to the start-up.

“The difficulties around accessing content was a problem I really understood and appreciated,” said Livingston. “I didn’t believe in starting a company on a part-time basis, so I decided I’d rather captain my own dinghy than be another crew member on a large ship.”

In September 2012, Livingston built the first version of Street Contxt. He then raised some money and hired his first engineer Mike Pettypiece, who currently serves as the chief technology officer.

“It was completely coincidental,” said Livingston of securing Series A funding from Formation 8 in January. “We were invited to a founders breakfast in Waterloo with a bunch of companies including Formation 8. On the way out, I told them I needed a ride to the Tannery, which I actually didn’t, and they kindly gave me a ride.”

Livingston stayed in touch, and asked the company for advice about what they were looking for.

“We aligned in a lot of ways, so they became a small investor in a seed round,” said Livingston. “The probability that you’ll receive Series A funding is so low, it’s incredible.”

Series A funding is a class of stock sold to investors for stake in the company during the first significant round of venture capital financing.

Staying afloat over the last four years has taken what Livingston terms “delusional optimism” combined with the ability to take feedback and advice, yet ignore everything at the same time. He also reminds hopeful start-up entrepreneurs that “playing start-up” is different than being successful.

“For some people, it’s better to start at a high-growth company where you can make mistakes on someone else’s dime,” said Livingston. “If you don’t love it, the hours are going to seem long. You just need to put your head down and make a good product. I’m always working, I travel a lot – it’s a continuum for me, I’m always thinking about it.”

Street Contxt currently operates in Toronto and New York City where a majority of large Canadian banks and financial institutions use the program. With this new funding, Livingston hopes to expand Street Contxt to the U.K.

“At the end of the day, I know that regardless of Street Contxt’s success, I’ve had the opportunity to build and manage a company at 26 – it’s really a fantastic experience,” he said.