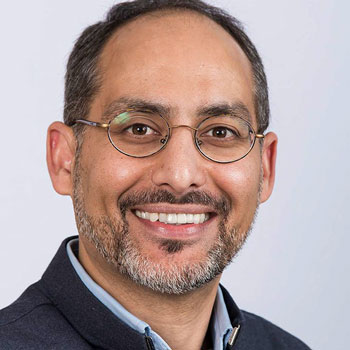 Associate Professor Ali Hassan Zaidi feels right at home at Wilfrid Laurier University, where his teaching has brought the beauty of the world to his students through engaging courses featuring intercultural workshops and inspiring lectures.

This past year, Zaidi, who teaches in the Department of Global Studies, coordinates the Muslim Studies Option and will be cross-appointed in the Department of Religion and Culture starting in September 2017, was honoured with the first-ever Laurier Award for Teaching Excellence in Internationalization.

“This award recognizes the value of internationalization at home,” says Zaidi. “How do we help students who don’t travel abroad expand their horizons, intercultural competencies and willingness to engage?”

It also recognizes the need for balance — being aware of the international scene, with its ugliness, fear and violence, as well as the hope and joy in people’s lives, he says.

Zaidi has been teaching first- to fourth-year courses at Laurier since 2006, starting as a sessional instructor while working on his PhD, then moving to a limited term appointment and eventually a tenure-track position.

“Laurier’s Global Studies Department feels like where I belong, intellectually and also in terms of the people I work with,” he says. “We have a wonderful ethos — people care about one another and are really intellectually engaged. It’s a great feeling to be part of it.”

"Excellent teachers come in many different forms, but what connects them all is an underlying sense of authenticity — one who engages with their students as a whole person and with passion for the material."

Zaidi’s courses engage with the world in both its ugliness and now, more increasingly, its beauty. He has always considered his teaching to be effective, but it was not until around the time of his sabbatical in 2012 that Zaidi recognized the need for change. Now, his focus on a deeper level of engagement is something he consciously pursues and he believes it resonates with students.

“Internationalization is about dealing with the realities of the world,” he says. “But the dark realities covered on the nightly news are not the larger and more pervasive everyday realities for many people.”

Upon reflection, Zaidi saw that students would often leave class feeling overwhelmed and at the end of four years of talking about global problems, without seeing big solutions, they left university with crushed idealism. It was an unintended outcome, he explains.

He spent his sabbatical teaching in Lahore, Pakistan, and he also had an opportunity to travel with his family throughout Morocco, Spain and Qatar.

“There was some anxiety and fear, because my name gives away a minority identity in the Pakistani context, but it was such a positive and beautiful experience,” he says. “What I realized during that time is that there is so much more beauty out there that my students would never know about if all they did was listen to the negativity in the news.”

Zaidi saw people — living on the frontlines of extremism, poverty and violence — remain hopeful and optimistic. He returned to Laurier wanting to convey that positivity.

“I was effective but had only been teaching to the mind,” he says. “Excellent teachers come in many different forms, but what connects them all is an underlying sense of authenticity — one who engages with their students as a whole person and with passion for the material.”

With this realization and adjustments, Zaidi saw his students respond in ways he did not expect.

He began reaching out to key partners at Laurier, including Nadine LeGros in the Centre for Teaching Innovation and Excellence (CTIE), who helped him develop intercultural workshops in his courses and evaluated students’ openness to cultural change by using personality indexes. Zaidi also incorporated music and calligraphy workshops and began working with community partners, such as the Ismaili Council of Ontario and the Pakistani community in Waterloo Region, to bring speakers from the global South to Laurier’s Waterloo campus.

“I lay it out for my students — as a brown Muslim man in the context of a Trump-era, I’m anxious yet hopeful,” he says. “And if we acknowledge where we’re coming from — our context and biases — it helps us acknowledge other points of view.”

He adds that students want to be inspired, remain hopeful and know that they can make some change in the world.

“As students begin to engage with the world and hear other points of view and ways of doing things, they sometimes lose their own footing — it’s one of the biggest challenges,” says Zaidi. “Teachers should help students remain grounded in a point of view, and be able to act and make a decision.”