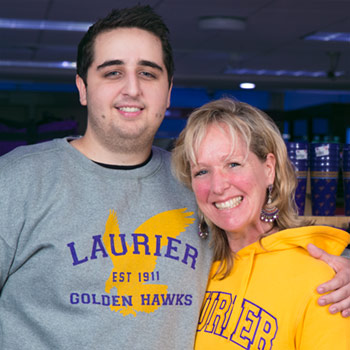 Ann Lyddon kept in touch with her son Maverik through text messages while he studied biochemistry at Laurier’s Waterloo campus. But Ann didn’t text Maverik from the family home in Mount Forest. She texted him from the other side of the Science Building courtyard, while taking a break from her own studies as a Laurier student.

The week of June 12, Ann and Maverik will receive their degrees during their respective convocation ceremonies and join Laurier’s graduating class of 2017 together.

Obtaining a bachelor’s degree had been a life-long dream for the 52-year old Montreal native. Ann, a substitute educational assistant, would like to teach English abroad, and studying languages helped her to further develop her skillset to teach English-language learners.

“I wanted to hone my French- and Spanish-speaking skills but also understand the theoretical aspects of the languages,” says Ann, who has also lived in Chile. “Maverik loved going to Laurier, so applying here seemed like a good option for me.”

Ann enrolled in Laurier’s general Bachelor of Arts program in 2014, focusing her studies on French- and Spanish-language courses. Despite previous post-secondary studies (she has a diploma from Conestoga College), returning to school as an adult student came with its challenges. Ann, who admits most 20-year-old young men may not want to run in to their mother on campus, is extremely grateful for the support and guidance Maverik provided – on and off campus.

“Maverik really helped to balance me throughout my time at Laurier,” says Ann. “He took me on as a peer and a fellow student. He’s been such a role model to me.”

Besides offering regular reassurance, Maverik tried to school Ann on aspects of student life that were new to her – such as using a web-based course registration portal, and navigating an online learning environment.

Maverik says having his mom attend university at the same time was, well, ‘interesting.’ His mom and his girlfriend were both students in the same first-year French class, something Maverik jokes about trying to keep from his mom.

But knowing how difficult university academics can be from his own experience in the biochemistry program, he was happy to help his mom any way he could.

“I know much work goes into getting your degree,” he says. “I have immense respect for my mom. This is quite the achievement for both of us.”

Ann, who recently completed her Consulting for Education - Teaching English as a Second Language to Speakers of Other Languages (ACE-TESOL) certificate, plans to travel to Asia after graduation to embark on her English teaching career.

Maverik’s plans? He’s considering a graduate degree, but this one he will do on his own.