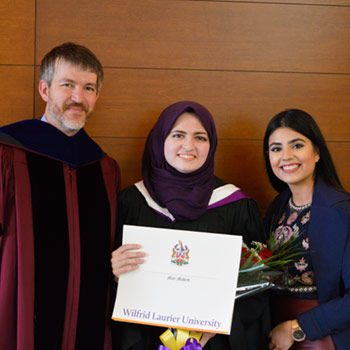 “I am so lucky to have found Laurier,” says Mahrat, who was one of 10 students studying at Laurier through Jusoor Syria’s ‘100 Syrian Women, 10,000 Syrian Lives’ scholarship program.

The scholarship program, one of many administered by the NGO, is open to Syrian women who have demonstrated exemplary social service with leadership, academic excellence and civic responsibility. The applicant’s character, which should reflect the importance of empathy, humility, courage and resilience, and the potential to serve as global leaders, is also considered.

As an undergraduate student in the United Arab Emirates, she volunteered with a campus group to establish a library at a Syrian refugee camp in Turkey. The library was set up to provide Arabic educational resources to those in living in the camp. It also offered the camp’s student-youth access to information and reading materials while waiting to resume their studies.

Mahrat could relate to the frustrations of those students because she was once in their shoes. Her undergraduate studies at Albaath University, in her hometown of Homs, Syria, were thwarted by the outbreak of civil war in 2011.

“I remember riding the bus to classes one day when the driver suddenly started shouting, ‘Get down! Get down!’” says Mahrat. She said the driver could see gunmen on the streets and became worried for his riders’ safety.

She also recalls running from a campus lab when bullets sprayed through the windows.

The humanitarian crisis in Syria has uprooted millions since 2011, prompting governments, NGOs, community groups and educational institutions to respond.

In 2013, students in Professor Gavin Brockett’s first-year seminar on the Israeli-Palestinian conflict were inspired to take action.

“ISOW is evidence of the significant impact Laurier students can make in the lives of others while educating themselves about conflict and the humanitarian response,” says Brockett, who teaches in the History and Religion and Culture departments. “Dozens of Laurier student leaders have committed countless hours to shaping ISOW which has led to 13 students from areas experiencing violent conflict to come to Laurier and succeed in their studies.”

Mahrat says ISOW helped to ease her transition into life as a graduate student in Canada.

“ISOW really took care of me,” says Mahrat, recalling her arrival at the ISOW student house on Hickory Street in Waterloo. “Everything was ready: a bed, food, a toothbrush – even a bear on my pillow.”

Personal touches aside, Mahrat says the support she received from ISOW was invaluable. There was regular email contact from the group’s president at the time, Annie Serez, ahead of Mahrat’s arrival at the Waterloo campus in the late summer of 2016. Serez and Brockett helped Mahrat navigate through challenging visa issues, liaising with the local Member of Parliament when it was denied.

“The students and faculty involved with ISOW Laurier were so supportive,” says Mahrat. “It’s like they never left my side.”

Mahrat’s parents were not able to attend their daughter’s convocation ceremony in October; they have applied to Canada as refugees and are awaiting a decision.

“I really missed them,” says Mahrat of the moment in the convocation ceremony when graduates could wave to family and friends in the audience who had supported them through their studies. “But I pictured them in my mind.”

Mahrat’s parents may have been absent from the ceremony, but her Golden Hawk family showed up in full force.

Mahrat continues to draw on the support and genuine care she felt from her extended Laurier family in her work as a youth coordinator at Reception House in Kitchener, which provides refugee assistance to approximately 400 families each year.

Mahrat works with Syrian youth between the ages of 15 and 25 years of age, connecting them with schooling, English language classes, homework assistance and social programs.

She is also working on the launch of a friendship circle program for Syrian youth in Waterloo region, as she feels they experience a ‘state of isolation’ as they adjust to their new lives in Canada.

“The cross-cultural experience I had because of Jusoor, ISOW and Laurier empowers the work I’m doing at Reception House,” says Mahrat. “I am forever grateful for that.”