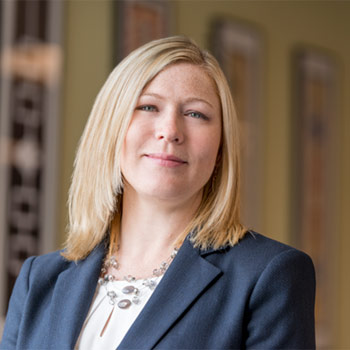 Of the many challenging situations police officers face, some of the most difficult are when they respond to an individual going through a mental-health crisis. Officers deal successfully with such calls the vast majority of the time – but there have been cases where things have gone terribly wrong, resulting in the injury or death of the person in crisis.

“Even one of these cases is one too many,” says Associate Professor Jennifer Lavoie of Wilfrid Laurier University’s Department of Criminology.

Lavoie, who is based on Laurier’s Brantford campus, is working to help police services improve the way they respond to people in mental-health crisis.

For the last few years, she and some of her graduate students have been riding along with police on calls, analyzing observational and official police data on these calls and interviewing people who have interacted with police while they were experiencing a mental health crisis. It’s a project for which she received a Social Sciences and Humanities Research Council (SSHRC) Insight Development Grant.

It’s hard to say just how often police interact with people experiencing mental health issues but different estimates say it’s been between five and 30 per cent of the time – and calls for police to deal with people in mental health crisis appear to be going up, says Lavoie.

“These are calls that are more challenging for police so they may take more time for officers to resolve them. They may require transport to hospital and oftentimes that can be two, three, four hours waiting in an emergency department for the hospital to decide whether to admit that person for involuntary treatment.”

Mental health issues touch everyone. One in five Canadians experience a significant mental illness at some point in their lives. Even so, “mental illness is highly stigmatized so it’s difficult for people to ask for help,” says Lavoie.

Even for those who want help, it can be very difficult to access mental-health treatment, says Lavoie. “Often a person is ill for a very long period of time and they go into crisis eventually because they’re not getting help. And that’s often when the police are called.”

Police expertise varies across the country. Some police services have mobile crisis teams highly trained for the wide range of situations officers could end up dealing with in a mental-health call – ranging from people with thoughts of suicide to people experiencing frightening delusions or hallucinations.

“There’s no standardized training, so depending on what service they’re with, they may have only received a couple of hours of training to manage a person in mental health crisis and that’s woefully insufficient.”

Lavoie and her colleagues from the University of Brock, in consultation with police services, mental health workers, and people who have interacted with police while they were experiencing mental health issues, are now working on developing a scenario-based program to teach police officers de-escalation and de-stigmatization techniques to reduce unnecessary application of use-of-force techniques.

The effort to reduce the use of force doesn’t just mean having police draw their guns less, says Lavoie. The use of handcuffs, tasers, pepper spray and physical restraint are all use-of-force techniques. Even the way officers communicate – such as by shouting commands – can be use-of-force techniques that may not be appropriate when dealing with a person in mental health crisis.

“It’s not very useful to continue yelling commands at people when they’re not able to understand or respond,” says Lavoie.

A major part of the training involves changing attitudes toward people with mental health challenges.

“We know that police officers – or anyone – who have stigmatizing attitudes towards people with mental illness will perceive them as being more dangerous and more unpredictable than they actually are,” says Lavoie. “So this may heighten their likelihood of applying use-of-force options inappropriately.”

With a more accurate perspective and an understanding of the effect of stigma on their own decision-making, officers should be able to more accurately perceive whether a situation involves imminent threat.

When situations do not involve imminent threat, de-escalation techniques can calm the person so they can communicate with police. If it’s necessary to initially use force, police need to know how to later shift into de-escalation mode.

“Safety is paramount but so is sanctity of life,” says Lavoie. “The officer needs to show empathy, they need to be able to engage in active listening, they need to build rapport and reassure the person who’s in mental-health crisis.”

It’s also important for police to engage in what Lavoie calls procedural justice.

“This is the idea that people with lived experience of mental illness feel like they’re treated with dignity and respect, they feel heard, the police officer listens to their point of view and maybe they’re given some choice in the situation.”

Perhaps the most important concept Lavoie wants to get across – both to police officers and to the general population – is that people with mental health issues aren’t always going to be stuck in a cycle of crisis or criminalization.

“People do get better, they do live productive lives and they can be empowered.”