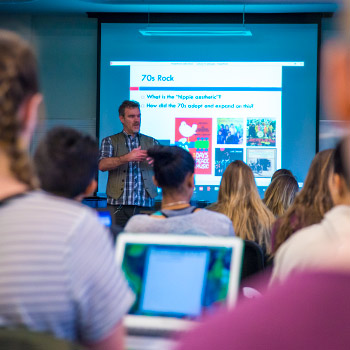 If the second half of the 20th century had a soundtrack, it was rock ‘n’ roll. From Elvis to the Beatles to Nirvana, rock music captured and shaped the seismic cultural shifts of an era. The popular Wilfrid Laurier University first-year music course, History of Rock Music, examines both the music and culture associated with rock.

Developed and taught by longtime Laurier instructor Brent Hagerman, the course is open to music and non-music majors and is offered online as well as in traditional lecture format.

“Popular music is one of the windows to the world,” says Hagerman, who is a working musician in addition to teaching a variety of courses on topics including music, culture and religion. “It’s a place where our norms and values are reiterated, produced and contested."

“It’s interesting to compare how artists came up with different music to match the political climate at the time,” says Matthew Davis, a first-year business student taking the course as an elective. “It’s given me a really good background about where some of my favourite music has come from.”

Rock ‘n’ roll developed as rhythm and blues, country and mainstream “Tin Pan Alley” pop came together during the early 1950s, says Hagerman. Many music historians consider “Rocket 88,” recorded in 1951 by Jackie Brenston and his Delta Cats, to be the first rock ‘n’ roll song because of its use of distorted guitar in what is otherwise a rhythm and blues song.

The biggest rock star of the 1950s was Elvis Presley. He brought rock into the mainstream in no small part because he was a white man playing music more associated with black people. However, this was not a simple case of appropriation – it was subversive and controversial.

“This music is bringing together black and white cultures and in the United States at the time, the moral gatekeepers were white males who felt threatened by a breaking down of racial barriers,” says Hagerman. “It was assumed that black music was somehow morally corrupt. So once Elvis started performing music that was considered black music or merged with black music, these stereotypes carried through.”

Presley’s hip-shaking dancing caused controversy because it was thought to be sexually suggestive – but his popularity among young people was unstoppable. This was in itself a cultural departure because before baby boomers entered their teens, kids and adolescents listened to the same music as their parents.

The advent of rock marked “the first generation of the modern teenager,” says Hagerman. “Rock ‘n’ roll is a youth movement. The music is different, the clothes are different, and there’s a certain rebelliousness to it.”

However, there has always been a push-and-pull relationship between rebelliousness and conformity in rock, says Hagerman.

Chuck Berry, who was African-American, enjoyed mainstream success in part by avoiding appearing “too black.” Not only did he avoid sexual or otherwise controversial subjects, he appeared overexposed and with straightish hair in early publicity shots.

“He was less threatening to the white mainstream,” says Hagerman.

Rock music has morphed many times, often driven by grassroots subcultures in reaction to the mainstream music industry. When major label RCA Victor signed Presley as its first rock artist in 1955, the process of “smoothing the rough edges off rock n roll” started, says Hagerman.

The folk music revival of the 1960s was in part a reaction to this commercialization – and it was just the beginning of a cycle.

“Punk rock in the mid-1970s is very much a reaction to what some saw as a crisis of authenticity in mainstream rock music,” says Hagerman, adding that grunge emerged in the 1990s for similar reasons.

These days, however, Hagerman sees different patterns. Though straight-ahead guitar rock may be waning in popularity, rock’s influence can be detected so broadly that it’s difficult to define what rock is anymore. His course uses “rock” as an umbrella term for all western popular music produced after the 1950s.

“When we look at a lot of music today that may not sound like rock ‘n’ roll, if you listen to Drake or Kendrick Lamar, in many ways it’s one of the branches of what rock ‘n’ roll starts,” says Hagerman.

Questioning the Norms of Rock

Despite the rebelliousness associated with “sex, drugs and rock ‘n’ roll,” rock has in many ways reproduced mainstream cultural norms.

“Rock for much of its history has reiterated norms around masculinity and whiteness,” says Hagerman. “The history of rock ‘n’ roll is in many ways the history of white men with guitars on stage and it’s also reiterated cultural appropriation and the notion that it’s okay to steal music from underprivileged cultures.”

Men who didn’t conform to traditional masculine roles have encountered resistance. For instance, David Bowie’s The Man Who Sold the World album was released in the UK in 1971 with a cover photo of the androgynous singer in a dress, but record companies in other countries demanded different cover art.

Women’s roles in popular music were highly restricted until at least the 1970s, with relatively few female artists achieving major success and fewer still having much control over their image and career. Madonna began to change that during the 1980s with her access to the new platform of MTV, says Hagerman.

Madonna’s controversial videos depicted women with sexual agency. How she operated behind the scenes was arguably just as radical – she was an “astute businesswoman” who took the financial reins of her career, Hagerman says.

Debates about the portrayal of women in music still continue today. Miley Cyrus’s nudity in her 2013 “Wrecking Ball” video was a flashpoint, with feminists taking different sides on whether it was an example of the continued sexualization of women in music or an empowered and informed choice.

Class discussions in History of Rock Music relate the past to the present and students say they have gained greater appreciation for the roots of the music they listen to. Some say this will help them in their future careers.

“This course gives me a good background in different genres and time periods that could be popular with different age groups, so if I’m working with seniors I’ll be able to have a good understanding of the music that was popular when they were younger,” says Ella Latta Suazo, a first-year community music student.

Colin Watts, a first-year political science student, says it opened his eyes to hear the political and feminist themes in the protest songs of the hippie era. The course is “fun, informative and cool,” says Watts. “I love it.”