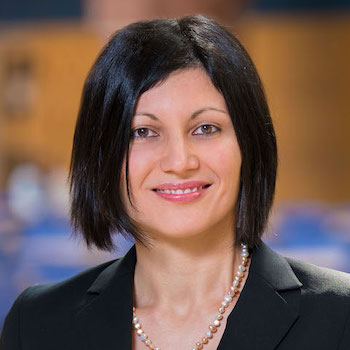 Society has come a long way from the days when men were always the providers and women were always the homemakers. Women participate in the workforce at almost the same rate as men and there are examples of women in leadership across fields of endeavour.

Far from it, says Ivona Hideg. “What we’re faced with today is a far subtler type of prejudice against women in the workplace.”

Hideg, an associate professor of organizational behaviour and human resource management at Wilfrid Laurier University’s Lazaridis School of Business and Economics, is well known for her research on gender and diversity in the workplace. One vivid example of the subtle exclusion of women comes from her experience sitting on the board of a national professional society where a few years ago she coordinated nominations for a keynote speaker for a prestigious national event.

“I asked for nominations from everybody on the board, which was a gender-balanced executive board,” says Hideg. “I received about 30 male names, mostly white men. Not a single woman was nominated.”

Who is a Leader?

Stereotypical notions about gender are deeply engrained, with the result being that women are still underrepresented in high-level leadership roles and in traditionally male disciplines – which, not coincidentally, tend to be high in pay and prestige.

“When we talk about experts and leaders, we just don’t think about women,” says Hideg. “It’s not because women are less capable, it’s because we’re just not noticed. A woman needs to be three times better than a man to be noticed and advance at the same rate as men.”

“When we talk about experts and leaders, we just don’t think about women. It’s not because women are less capable, it’s because we’re just not noticed."

Women face barriers at all levels, says Hideg. This includes barriers to entry, particularly in male-dominated fields, and once they have jobs, receiving equal pay, mentorship and opportunities.

As for the keynote speaker nominations, when Hideg revealed the demographics to board members, they found it eye-opening and ultimately invited a female speaker. But organizations should have policies in place to combat the tendency to overlook women, says Hideg.

“Every time we collect any nominations, we need to ensure that the pool of nominees is balanced on multiple demographic levels such as race and gender.”

Hideg’s research indicates barriers for women are often born out of misplaced benevolence.

“We all subscribe to traditional gender stereotypes in which women are seen as family caretakers, nurturing, emotional and soft, whereas men are seen as more ambitious, career-dedicated and assertive,” says Hideg.

“Sometimes, as a manager, you want to help women in the workplace because you know they have children at home, so you’re not going to give them the challenging or overseas assignment. But when the promotion comes up, you promote your male employee because he’s got the right experience under his belt whereas your female employees don’t.”

The effects of subtle forms of discrimination accumulate over the years. Though men and women are now usually offered similar pay when they enter an organization, a gap in skills and experience that develops later may be responsible for some of the gender pay gap, says Hideg.

Stereotypes affect all women, including those who neither have nor want children. However, women who do in fact decide to have children and take significant leaves to care for them face the largest negative effects on their careers.

“We are still a very gendered society where we expect women to take care of the babies,” says Hideg. “Our federal-level government policy allows both men and women to take leaves but in fact only 13 per cent of Canadian men take any parental leave.”

This reinforces employers’ stereotypes that women are likely “leavers,” which results in them being put into “mommy tracks, where they are given positions of less responsibility, which also means less money, less career promotions and other benefits,” says Hideg.

A recent policy change allowing parents to choose 18-month leaves at lower benefit rates rather than 12 months at higher rates is “not a gender equality-friendly move,” says Hideg.

“Our statistics clearly show that the overwhelming majority of people taking these leaves are women. There is a large body of research showing that when women take longer leaves of one year and above, it is detrimental to their careers and wages. And the negative effects accumulate over time and never go away.”

A new rule effective March 17 allowing only the non-birthing parent to take an additional five to eight weeks of leave is a step in the right direction – but only a small one, says Hideg.

One issue is that the non-birthing parent – typically a man – can take the leave at the same time as the birthing parent, which tends to make them a “helper” rather than a full-time parent. Also, five weeks is “not enough time for fathers to learn the ropes,” says Hideg.

Gender stereotypes may be deeply engrained in society but it’s still possible to change attitudes and behaviours, says Hideg.

For instance, the Quebec government offers a fathers-only parental leave of eight weeks, at a high rate of benefits. There, substantially more men take parental leave than elsewhere in Canada. This can be effective in breaking down employer stereotypes about parents, stigma against men who take leaves and women’s ideas that they “magically” know more about babies than men do, says Hideg.

An important component of change is education. This starts in the cradle, when boys and girls start hearing different messages about the toys they should play with, the clothes they should wear and the traits most valued for their genders. Parents should examine what they’re implicitly teaching and lead by example – for example, by splitting all household chores 50/50, says Hideg.

Adults can also learn to change their thinking.

“We have to educate people that these stereotypes are alive and that it’s not just men who stereotype,” says Hideg. “Both men and women subscribe to these more ‘benevolent’ sexist attitudes in particular. So the first step is to recognize that subtle biases do exist and that we need ways to counter them.”

Men need to get involved in learning about gender equality and in advocating for it, rather than figuring it’s a “women’s issue,” says Hideg.

“Both women and men need to pave the way for a more gender-egalitarian society for our future and for our children. Gender equality is about giving women equal opportunities to succeed in the workplace and society at large, but it is also about giving men equal opportunities to spend time with their children and take care of them without being stigmatized in the workplace.”