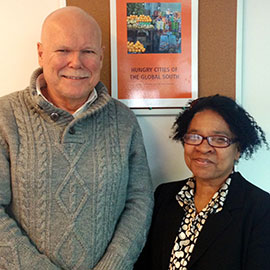 An “urban food desert” defines a geographic area where affordable and nutritious food is difficult to obtain due to personal circumstances and/or external factors.

While scholars have researched the urban food desert concept in European and North American cities, studying urban food deserts has gained little traction in Africa, and in the Global South more generally.

Mary Caesar, who begins a postdoctoral fellowship at Laurier at the end of April, will be studying the food system in Cape Town, South Africa. Caesar, whose primary research areas are public health, urban food security, urban governance, gender, and race in South and southern Africa, will join the Hungry Cities Partnership project directed by Laurier’s Jonathan Crush at the Balsillie School of International Affairs.

“In part the lack of knowledge about food deserts in African, Asian, and central American cities is because urban food insecurity itself is largely invisible to researchers and policy-makers,” said Crush, CIGI chair in Global Migration and Development at the Balsillie School of International Affairs, and professor in Laurier’s School of International Policy and Governance. “But more fundamentally, the idea of the food desert is integrally connected to the location strategies of the supermarkets that supply the large majority of the food in European and North American cities.”

The recent and rapid expansion of supermarkets in cities of the Global South raises the obvious question, however, of whether the idea of the food desert should be revisited and applied to analysis of Africa’s urban food insecurity crisis.

Caesar and Crush will be presenting their work at the Commonwealth Geographic Bureau Workshop in Kingston, Jamaica in April. Their presentation examines the case of Cape Town, South Africa, where supermarkets now command a significant market share and have been expanding into all areas of the city. After tracing the process of supermarket expansion in recent decades, the paper examines the nature of the food interactions between modern retail, the informal food economy and the food access of poor urban neighbourhoods. They explore the nature and drivers of Cape Town’s urban food deserts and argue that the concept of urban food deserts needs to be reformulated and redefined to fit African realities.

Crush is a founding member of Laurier's new 2030+ Group and the founder of the African Food Security Urban Network, which studies the links between urbanization, migration and food security in South Africa. He is also a Laurier alumnus.