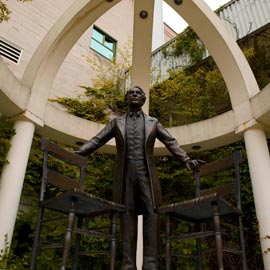 WATERLOO – Wilfrid Laurier University President and Vice-Chancellor Max Blouw has struck a Special Advisory Committee to review the varied opinions associated with the Prime Ministers Statues Project and to make recommendations on how the project might be moved forward.

The Special Advisory Committee will include representatives from the university Senate, Board of Governors, Aboriginal Initiatives office, Diversity and Equity office, undergraduate and graduate student unions, alumni association, Student Affairs office, the Waterloo Lutheran Seminary, and faculty and staff members who sit on the PM Statues Advisory Committee.

“The discussion at Senate and the ensuing public discourse on the PM statues project has illustrated a wide divergence of views about Canada’s prime ministers and about the project’s objectives,” said Blouw. “I ask that the Special Advisory Committee meet with the range of individuals involved in the PM statues project, including the community partners, and report back to me early in the New Year with a recommendation on how best to proceed. In my role as president, I will bring the final recommendations from the committee back to both the Senate and the Board of Governors.”

Blouw added: “I would like to emphasize two points. First, the PM statues project was initiated in good faith and with the best of intentions. Second, as a university community it is essential that we encourage and welcome reasoned, respectful, and informed discussions, no matter what the issue.”

Earlier this year, a group of citizens approached the university with a proposal to situate a collection of statues depicting all of Canada’s past prime ministers on Laurier’s Waterloo campus. Intended as a sesquicentennial project to celebrate Canada’s 150th birthday in 2017, a key component of the proposal includes an educational program aimed at raising awareness among Canadians of our history as a country since Confederation in 1867.