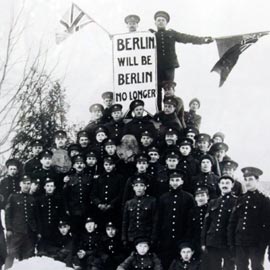 WATERLOO – A new website developed by Wilfrid Laurier University’s Laurier Centre for Military, Strategic and Disarmament Studies (LCMSDS), in partnership with the Department of History and Faculty of Arts, is allowing people to explore a pivotal time in the history of Kitchener-Waterloo — the First World War — through the personal letters and professional documents of those who lived it.

The LCMSDS and the Laurier Military History Archive collaborated on the website, waterlooatwar.ca, which launched this week in honour of Remembrance Day.

“This is an important chapter in Kitchener-Waterloo’s past which speaks to both our military and social history,” said Mark Humphries, director of the LCMSDS and Dunkley chair in War and the Canadian Experience. “I am very proud of the hard work that Laurier graduate and undergraduate students have put into this project to honour the centennial of the First World War in a local way. It would not have happened without donations from the community and funding from Laurier’s Special Initiatives Fund.”

Waterloo at War is a unique look at Waterloo County during the First World War, based on the records of the 118th Overseas Battalion, a unit raised by area officials beginning in late 1915. For the first time, the entire collection is available for electronic access by the general public. It includes many personal letters, plus internal documents on recruiting, discipline, training and much more.

The materials shed light on why local city Berlin changed its name to Kitchener and a time when tensions between military officials, soldiers and local citizens boiled over with incidents like the ransacking of the Concordia Club and the mysterious disappearance of a bust of Kaiser Wilhelm I from Victoria Park.

Waterloo at War also includes prepared lesson plans designed to let high school students and teachers explore topics like desertion, recruiting, officer enlistments, daily life in the battalion, and its relations with the community through primary source materials. Students are challenged to construct historical accounts considering the motivations and actions of soldiers from diverse backgrounds and consider the interactions of ordinary people with the civic and business leaders who helmed the local war effort.