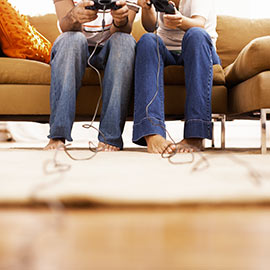 Offering a radical new product feature? Laurier researchers say add it on, don’t build it in

Offering a radical new product feature? Laurier researchers say add it on, don’t build it in

WATERLOO – From automobiles to consumer electronics, today’s products boast new and fancy features in an endless competition for consumers’ attention. But when faced with radical new innovations, how much risk are consumers willing to take? Would they buy a new video game console that offers a mind-control feature already built in, or one that offers mind-control as an accessory attached to the console?

Two professors from Wilfrid Laurier University’s Lazaridis School of Business & Economics, Zhenfeng Ma, an assistant professor of Marketing, and Tripat Gill, an associate professor of Marketing and Canada Research Chair in Market Insight and Innovation, looked at whether the location of an innovative product feature – if it is offered as an accessory or if it is built in as a component of the base product – influenced consumers’ intent to purchase the product.

“Intuitively, one might think that the location of the innovation in the product should not matter much, since consumers get the same benefits from both design options,” said Gill. “But in fact, it does have a significant influence on consumers’ purchase intentions.”

With the new autopilot (or driverless) technology tested in cars, the technology has been tested both as a built-in system and by offering same autopilot technology as an accessory to retrofit existing vehicles. In the video game industry, manufacturers increasingly offer new product features such as motion-sensing capability through optional accessories, as opposed to integrating the new features with the video game console.

Findings consistently showed that for features based on radically new technology – such as a mind-control system for video games, a waterless washing machine, a self-driving car, or smartphones charged by motion – consumers prefer features to be offered in a detachable accessory rather than being built in the base product.

“The benefits of having an addition as opposed to something that’s built into the system’s core for really new innovations is perceived as less risky, more versatile and easier to comprehend,” said Ma. “These differences exist only for radical new innovations, but not for those that are incremental in nature.”

In the study with self-driving cars, respondents were nearly twice as likely to sign up to test-drive the car if the new technology was offered in an accessory rather than built into the car.

Giving consumers the ability to switch a function on and off in the base component was not enough to influence their intent to purchase the product; they only showed an increased likelihood to purchase when the accessory with the new feature was physically detachable from the base product.

To view the entire study in more detail, visit journals.ama.org.