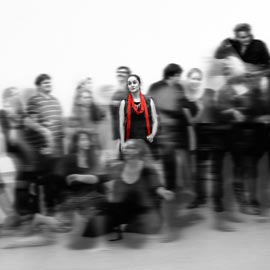 WATERLOO – In celebration of the 40th anniversary of Wilfrid Laurier University’s Faculty of Music, Opera Laurier will perform a collection of party scenes, titled “It's my party, and I'll cry if I want to,” excerpted from the following operas: Falstaff and La Traviata by Giuseppe Verdi, The Tender Land by Aaron Copland, Les contes d’Hoffman by Jacques Offenbach, and Die Fledermaus by Johann Strauss Jr. The performances will take place Nov. 13 to 14 in the Maureen Forrester Recital Hall on Laurier’s Waterloo campus.

Giuseppe Verdi’s Falstaff is an operatic interpretation of Shakespeare’s comic play, The Merry Wives of Windsor. Falstaff tries to win the affections of Alice Ford and Meg Page, two married women, with a pair of identical love letters. The women decide to teach Falstaff a lesson. After a series of tricks and deceit-filled escapades, the opera ends on a happy note as Falstaff states that “all the world is a joke” and everyone laughs at what fools they have been.

Verdi’s La Traviata is set in Paris at the beginning of the 18th century, where the beautiful courtesan, Violetta Valéry, throws a luxurious party in celebration of her recovery from a serious illness. She is then introduced to Alfredo Germont, who must compete for her affections with her current lover Baron Douphol on this seemingly cheerful evening.

Copland’s The Tender Land depicts a Midwestern American family in the midst of the Great Depression. Laurie, the eldest daughter of the Moss family, has just graduated from high school, and her friends and relatives have gathered to celebrate. After everyone has eaten well, Laurie makes a speech to thank her well-wishers. Top and Martin, the hired hands, plan on getting grandpa Moss drunk with a good ol’fashioned hoedown.

The third act of Jacques Offenbach’s Les contes d’Hoffmann explores E.T.A. Hoffmann’s third great lover – the courtesan Giulietta. Her girls invite men to drink, dance, or play cards in a luxurious palace game room. She attempts to steal Hoffmann’s reflection from a mirror by seducing him. This enrages Schlemihl, her current favourite, who then disturbs the guests with the lack of his own shadow – claimed of course by Giulietta – and invites Hoffmann to try his luck at cards.

In Strauss Jr.'s Die Fledermaus, Prince Orlofsky throws a lavish party and everyone has found a way to attend. Eisenstein dodges jail for the night, pretending to be a marquis, Adele the maid fakes as an actress, Frank the warden acts like a French knight and Rosalinde is disguised as a Hungarian countess. Dr. Falke has orchestrated events to cheer Orlofsky, as they watch everyone caught up in their intrigue.

Opera Laurier is made up of Laurier voice performance students enrolled in The Practice of Opera course. Each fall, Opera Laurier stages a production of opera excerpts, followed by a full opera in the spring. This production will be directed by Professor Kimberly Barber and Laurier alumna Amanda Smith.

Opera Laurier tickets are free for Laurier students, high school students and children, $20 for adults, and $10 for seniors (60+) and non-Laurier university and college students. Tickets can be purchased at the door before each performance, or in advance by emailing concerts@wlu.ca or calling 519-884-1970 ext. 4439. This year tickets will also be offered online through ticketscene.ca.

Performances will take place in the Maureen Forrester Recital Hall at Laurier on Friday, Nov. 13 and Saturday, Nov. 14 at 8 p.m.