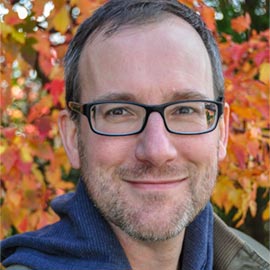 The Award for Teaching Excellence recognizes educators who excel at unlocking the potential of Ontario’s young people. The recipient is chosen from among Laurier faculty who have been nominated by Laurier students. Each member school of OUSA selects one faculty member from their respective institution to receive the award. Anderson is the eighth Laurier faculty member to be honoured with the award.

"It is especially heartening for any teacher to be recognized in this way by his or her students,” said Kathryn Carter, acting associate vice president, Teaching and Learning. “Congratulations to Chris for receiving this wonderful honour."

“Most of the students in my class aren’t going to major in political science, but it’s so important for students in the first year to explore different topics and learn how to think critically and justify their ways of thinking,” said Anderson. “We are all in some way political, so I want to help students develop the tools they need to understand and say something about issues that are important to them.”

Anderson says it’s crucial that his students know that their voices and ideas matter from the first day of class at Laurier. Throughout the course, he provides many opportunities for students to show not just their learning, but their own take on core political ideas and issues. He also works to provide students with as much choice as possible to take more ownership over their education.

“Students bring so much to the table in a classroom environment,” said Anderson. “Students constantly challenge my own thinking and research. They come at things from different angles and with different experiences that I would have never considered.”

Anderson hopes that each student will at least gain a better understanding of how politics and civics touch their life and will keep thinking about what kind of community members they want to be.

“The great thing about political science is that everyone has an experience of politics to draw from, whether it’s simply being a citizen or engaging in student and community politics,” said Anderson. “If my students can learn how to ask better questions of their society and also learn about themselves as students, then I have done my best.”

Anderson says that there is nothing quite like receiving an award such as this.

“It is a great feeling to be nominated by your students,” said Anderson. “The level of teaching excellence at Laurier is so high; I feel lucky to recognized by my students, both past and present, who have taken the time to share their kind words.”

The recipient of the 2015 OUSA Award for Teaching Excellence was Rebecca Godderis, associate professor, Society, Culture and Environment and Health Studies programs.

The Ontario Undergraduate Student Alliance represents the interests of over 140,000 professional and undergraduate full-time and part-time university students at seven student associations across Ontario. Since 2009, the Partners in Higher Education dinner has brought together an array of partners and stakeholders from Ontario's post-secondary sector to recognize teaching excellence. The OUSA presents its teaching awards annually to professors from each of the member campuses that have taken this role to heart and have been selected by their students as examples of teaching excellence.