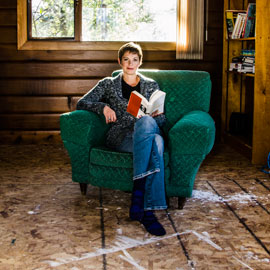 WATERLOO – Fiction writer Ashley Little has been chosen as Wilfrid Laurier University’s 2017 Edna Staebler Writer in Residence (WIR). Little is an award-winning author of five novels, including young adult (YA) fiction. Little will be the fifth writer to hold the WIR position, fulfilling her term at Laurier from January to April 2017.

“Ashley’s writing is sharp, witty and boundary pushing,” said Jenny Kerber, assistant professor of English and chair of the Edna Staebler Writer in Residence committee. “She is one of Canada’s most exciting younger writers and will make a wonderful addition to our campuses, as well as to the region. We are thrilled that she’ll be joining us.”

During her residency at Laurier, Little will be working on a new novel: BIG ME, a story of a teenage giant.

Each year, the Edna Staebler Laurier Writer in Residence acts as a resource to the Laurier community while pursuing individual writing projects. During her term at Laurier, Little will give public lectures, provide one-on-one feedback to student writers and writers in the community, and conduct writing workshops.

Little received a Bachelor of Fine Arts in Creative Writing and Film Studies from The University of Victoria and a Master in Fine Arts in Creative Writing from the University of British Columbia. Her first novel, PRICK: Confessions of a Tattoo Artist (Tightrope, 2011) was a finalist for the ReLit award and optioned for film. The New Normal (Orca, 2013) won the Sheila A. Egoff Children’s Literature Prize. Anatomy of a Girl Gang (Arsenal Pulp Press, 2013), won the Ethel Wilson Fiction Prize, was a finalist for the City of Vancouver Book Award, was long-listed for the International IMPAC Dublin Literary Award and has been optioned for television. Her fourth novel, Niagara Motel, will be released in October 2016 and her fifth novel, Confessions of a Teenage Leper, is forthcoming. Ashley’s work has been translated into Croatian, Korean, and Italian.

Little has served as writer-in-residence for the Vancouver Public Library and the Alexandra Writers Centre Society (Calgary). She has lived in Ontario, Alberta, Vancouver Island, and currently resides in the Okanagan Valley with her partner.

Due to the number of exceptional applications received for the 2015 residency, the committee decided to choose writers for both the 2016 and 2017 residency from the 2015 application pool. The application process for the 2018 competition will resume next spring.

The Edna Staebler Laurier Writer in Residence position was established in 2012 by a bequest from the late Edna Staebler, prolific creative non-fiction writer and author of the very popular “Schmecks” series of books that celebrate the culture of Waterloo Region.

A separate bequest from Staebler sponsors the Edna Staebler Award for Creative Non-Fiction, awarded each year to a writer’s first or second book of creative non-fiction, and the most lucrative literary prize administered by a Canadian university.