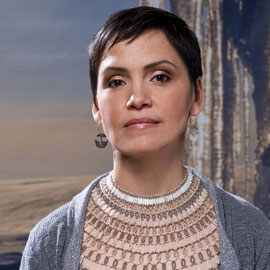 WATERLOO – Susan Aglukark, Juno Award-winning singer-songwriter, is slated to perform during a benefit concert in Waterloo to raise funds for the people of the Attawapiskat First Nation. The concert is scheduled for 7 p.m. Tuesday, May 10, at St. John’s Lutheran Church.

Waterloo Lutheran Seminary and the Laurier Centre for Music in the Community are partnering with a number of community groups to stage the concert. The project was initiated by the Waterloo-based Aboriginal drum group Mino Ode Kwewak N’gamowak (Good Hearted Women Singers) after recent reports of a suicide pact by more than a dozen Attawapiskat teenagers.

Kelly Laurila, the drum group’s facilitator, said she wanted to let the youth know that she cares about them, and that other group members felt the same way.

“We realized we could offer what we know — and that is song,” Laurila said. “Song could be used to raise awareness about Attawapiskat, and about the sad state of living conditions in so many First Nations communities. Song could also be used to raise funds.”

Laurila asked Aglukark to participate because the Inuk singer-songwriter launched a suicide-prevention campaign on social media, #ArcticRoseWarCry, in 2015.

Many non-Aboriginal groups quickly joined the local effort. Laurila said working together to stage the benefit concert is just as important as the donations for Attawapiskat.

“We all want to help each other and make this work,” she said. “This is a reconciliation effort.”

Debbie Lou Ludolph, director of worship ministries for the Kitchener-based Eastern Synod of the Evangelical Church in Canada, said joining the effort to help Attawapiskat is part of the social justice mission of the synod and the seminary.

“We have been building relationships with our Indigenous neighbours during the past decade,” said Ludolph, who is also director of the seminary-based Inshallah community singers who will be performing at the concert. “It is so good to be collaborative on these projects.”

Lee Willingham, director of the Laurier Centre for Music in the Community, said it’s heartening to be part of the group effort.

“Waterloo Region is a community with an activist heart and, for many, music is at the centre and a key part of the action,” said Willingham. “I can think of no other human practice more powerful than singing to mobilize our friends and neighbours for such an important cause.”

Admission: By donation. Proceeds will be directed to the Mennonite Central Committee Ontario’s “Building Hope — A Youth Gathering Place” program in Attawapiskat. Charitable tax receipts will be available. Online donations can be made at donate.mcccanada.ca. Write “Attawapiskat” in the comments section to direct funds to the program.