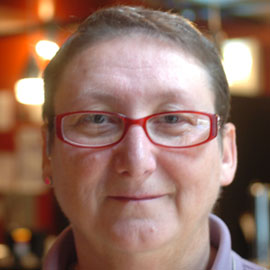 Rossiter is an associate professor in the Faculty of Human and Social Sciences in the Health Studies program at Wilfrid Laurier University’s Brantford campus. She is the principal investigator for Recounting Huronia: A Participatory Arts-Based Research Project, a Social Sciences and Humanities Research Council (SSHRC)-funded project that began in 2013.

Rossiter used her extensive experience in arts-based research to explore the complex issues involved in the institutional histories of people who lived at the Huronia Regional Centre in Orillia, Ontario. Opened in 1876, the institution was Canada’s first and largest residential facility for people with intellectual disabilities. Following its closure in 2009, a class-action lawsuit alleging abuse and neglect at the facility was filed against the province of Ontario. It was settled for $35 million dollars.

The project is co-led by Rossiter and colleagues nancy viva davis halifax (York University), David Fancy (Brock University) and Jay Dolmage (University of Waterloo). The community-based, participatory and arts-based project unites artists and scholars with survivors of the Huronia Regional Centre to create public awareness of their experiences through speeches and workshop presentations. The survivors are key co-researchers in this initiative.

“Understanding comes from hearing the voices of survivors and listening to them share their truths about their experiences,” said Rossiter. “Some of the stories are very hard to hear. The challenge of this work through Recounting Huronia is to bear witness and to ensure that the lived experiences of people with intellectual disabilities are recorded in the public record and available for people to learn about.”

“We are pleased to award this year’s James Montgomerie Community Award to such a deserving project as Recounting Huronia,” said Keith Dee, Director of Membership Services for Community Living Ontario. “Kate and her collaborators are co-creating opportunities for people with intellectual disability to fully participate in their community in meaningful ways.”

Community Living Ontario strives to create a world where people who have an intellectual disability can fully participate in their community because they are included in decisions and considered citizens. Community Living Ontario is a family-based association assisting people who have an intellectual disability and their families to lead the way in advancing inclusion in their own lives and in their communities. As a province-wide confederation, rooted in a strong network of individuals, families, friends, member organizations and community partners, it is guided by, adhere to and strive to achieve its goal and vision in all its actions. Community Living is a progressive leader in the Developmental Services Sector representing more than 12,000 individuals, families, over 100 member associations and community partners.