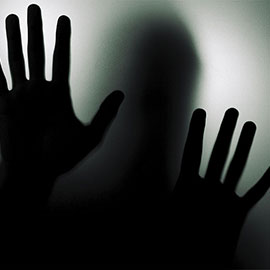 “What an excellent day for an exorcism.”

You might recognize this line — and with Halloween quickly approaching, there is a high probability that you might discuss, hear about or even work up the courage to watch such a scary movie.

Last year, he taught a third-year course on horror and gothic film, which had some simple guiding questions: what makes films “horror” and why do people watch them?

Do they have to be scary?

“Whenever we do genre studies we need criteria for what counts. But horror, unlike say, Western films, is slightly different,” says Bergstrom.

Westerns are defined mostly by setting, content and themes. But there is variety in horror — it is a very broad category that some theorists and critics have classified as a “body genre.” Similar to comedy, drama and erotica, horror is defined mostly by its effect on the audience rather than by its content.

“We think of the genre as taboo or transgressive, but it’s often moralistic, provides societal commentary, and is strangely ethical in a way.”

Bergstrom — who is defending his thesis on memory and subjectivity in contemporary art cinema later this fall — took students through the origins of horror.

“Horror can be anything that instils not just fear, but feelings of dread and anxiety,” says Bergstrom. “We looked at some older films that weren’t necessarily scary and students agreed that they were horror.”

His class uncovered that horror films are, ironically, often a way to deal with anxiety and fear.

“We think of the genre as taboo or transgressive, but it’s often moralistic, provides societal commentary, and is strangely ethical in a way.”

Universal Pictures’ 1931 Frankenstein tells the tale of a scientist overstepping the bounds of what human beings should do, for which he is punished.

The 1942 film, Cat People, is centred around a character that fears sexual intimacy.

“Cat People deals with anxiety in the war and post-war era surrounding women’s roles in society — it questions their place in the house or in the workforce as men return from the war,” says Bergstrom.

In the slasher subgenre, it is not uncommon for the lead woman to portray a more virginal and tomboyish character. Bergstrom says that typically she does not engage in sex or drinking and survives throughout the story in order to kill the slasher villain — think, for example, of Laurie Strode portrayed by Jamie Lee Curtis in John Carpenter’s 1978 film, Halloween. Sidney Prescott portrayed by Neve Campbell in Wes Craven’s 1996 film, Scream, twists the archetype.

Horror's evolution and contribution to film

Bergstrom says that relative to other genres, horror has often been marginalized and looked down upon.

The genre’s perception as cheesy and cheap did not start to change until the 1970s, when The Exorcist, a big-budget production directed by William Friedkin, was nominated for the Academy Award for Best Picture.

Horror films have also taken formal narrative devices from other genres and refreshed them, says Bergstrom.

Cat People, for example, brought the dark shadows, smoke and moral ambiguity of film noir into the genre. And Frankenstein drew from the visual style of German expressionism.

Alfred Hitchcock’s 1960 thriller, Psycho, is a strange case, says Bergstrom. Hitchcock was coming off one of his biggest hits, North by Northwest, and the production company questioned his motivation to film horror. Although Hitchcock found himself with a smaller budget, he managed to elevate the genre in a certain sense with Psycho.

The thriller broke several taboos and narrative conventions, says Bergstrom. It also became the first film, controversially, that would not allow people into the theatre once its screening began. Before that, film trailers tended to give away spoilers and people would arrive in the middle of films.

Bergstrom says that horror films tend to go in cycles with peaks in popularity and certain subgenres.

In the 1970s and ‘80s, there was a rise in the slasher subgenre — for example, Tobe Hooper’s 1974 film, The Texas Chain Saw Massacre. Today, there is a move back toward thoughtful, prestige horror films. Jennifer Kent’s, The Babadook, and David Robert Mitchell’s, It Follows, both released in 2014, are two that have received critical acclaim.

Bergstrom’s class also considered the evolution of horror films in different parts of the world and how common it is for directors to draw from and riff on particularly influential films.

“We looked at horror from East Asia as well as Europe, which in the early 2000s really pushed the boundaries of taboo and visceral content — the 2002 French horror film, Irréversible, is an example,” says Bergstrom.

Japanese and North American understandings of horror differ, and Hollywood has jumped to capitalize on what is novel about the former, says Bergstrom. Gore Verbinski’s 2002 film, The Ring, Takashi Shimizu’s 2004 film, The Grudge, and Walter Salles’ 2005 film, Dark Water, are just a few examples of American adaptations of Japanese films.

In the lead up to Halloween, Bergstrom has three scary movie recommendations for adult audiences.

Ti West’s 2009 film, House of the Devil, is what Bergstrom calls a throwback to the slasher subgenre. West manages to capture the aesthetic of the 1970s and ‘80s in a creepy plotline featuring several actors associated with independent film’s mumblecore movement.

Bergstrom also recommends Cat People, but says to be sure to find the original and not the 1980s remake, which is more explicit. The original is about innuendo and Bergstrom thinks it is more fun to watch.

Students interested in film studies can learn more through the department and by exploring opportunities to get involved, such as the Film Society at Laurier.