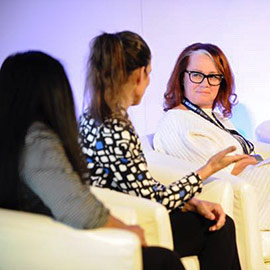 Getting more women involved in science, mathematics and business presents challenges, but mentorship, government leadership and support from community and family will help make needed change.

That was the message shared during a panel discussion titled "Women in Innovation: At the Leading Edge," held as part of the Innovation Summit at the University of Waterloo on Thursday.

"This is a complicated problem and I think physics is often easier to think about than this because there's so many layers to it," Ghose told attendees.

The three-day Innovation Summit brings together leading influencers to share innovative ideas about developing products, meeting demand in a rapidly changing economy and managing changes in the technology and business landscape.

Joining Ghose on the panel were Etobicoke North MP and Minister of Science Kirsty Duncan; Waterloo MP Bardish Chagger, who serves as government house leader and minister of small business and tourism; Barbara Fennessy, vice-president of applied research and international education at Conestoga College; and Joanne Atlee, professor and director of Women in Computer Science at the University of Waterloo. Arlene Dickinson, CEO of Venture Communications and star of the CBC Television series Dragons' Den, served as moderator.

The panel considered the question of how to get more women involved in business and scientific fields – and the numbers show reason for concern. Just 15.5 per cent of small and medium-sized businesses are majority owned by women and less than 30 per cent of current computing and engineering graduates are women.

During a discussion about how women can be supported in these fields, Dickinson asked Ghose if there should be specific programs for women. Ghose said such programs can help level the playing field.

"When we have these programs or special positions for women, let's say in academia or grants or support systems for women who want to start their own businesses, you're not sacrificing meritocracy and that's really important," Ghose said. "The fact is, it's not a level playing field. We need to use these programs to change the playing field so it's fair – so the game is fair.

"When we talk about special programs, we shouldn't really be talking about this as a means of 'helping' women because it implies there is something missing there and that women are somehow behind in some way. In fact, the data shows quite the opposite. Women who do succeed in science, those who are successful, tend to be twice as good as men who may not have had to face the same challenges."

Duncan said the federal government is committed to diversity and inclusion, including advancing the role of women in science, mathematics and business.

"Women have to be part of the conversation," Duncan said. "Women might ask different questions, use different methodologies, leading to new discoveries."

"It gives me real hope that we are having conversations that matter with people who are in positions to make change. That really excites me."
– Shohini Ghose

Ghose said family and community also have important roles to play in making necessary change. She referenced a research project that found parents spent three times longer answering a science question when their son asked it as compared to when their daughter asked it.

"These are perfectly well-meaning parents who absolutely want the best for both their sons and their daughters," Ghose said. "We talk about unconscious ways of behaviour and we are all responsible here. There are similar types of questions and studies that show we have biases in hiring and the way women are evaluated when they go up for either awards or grants. I think perception bias plays a huge role in it and that's a really, really hard thing to change. The important thing is discussing it and breaking those types of unconscious forms of bias."

Chagger agreed that working to eliminate bias is key to addressing the issue.

"What would be really refreshing and amazing would be if we could have a younger generation being taught not to learn those biases, not to learn those stereotypes and not to have a differentiation between the sexes," Chagger said. "It's not a matter of thinking outside of the box. Let's get rid of the box, let's do things differently, let's shake it up and provide those opportunities."

Ghose, today a celebrated quantum physicist, was one of very few women among a crowd of men studying mathematics and physics while obtaining her education in the U.S. The noticeable gender disparity led her to turn her attention to encouraging women to consider careers in science. After arriving at Laurier in 2005, she founded the university's Centre for Women in Science, which encourages women to pursue careers in science and mathematics, stand up to gender bias and aims to shift thinking by celebrating the contributions women make to scientific fields.

When it comes to advancing the role of women, Ghose said men also have an important role to play.

"The reality is that there are many men who are very supportive and actually have a voice that some of us women don't have in certain situations," she said. "And that's really important."

All of the panelists agreed that mentors play a key role in advancing the role of women in scientific and business fields.

"We can all be mentors to somebody," Ghose said. "We're talking about what we can do and that's so powerful."

Ghose, one of only two Canadians chosen as a 2014 TED Fellow, said she was pleased to take part in the panel discussion with such distinguished fellow panelists.

"What an honour," she said following the event. "But beyond that it gives me real hope that we are having conversations that matter with people who are in positions to make change. That really excites me.

"These are women that have had very interesting careers themselves, have seen the reality on the ground, have faced challenges and overcome them. They are now in a position to make change and that's amazing and wonderful."