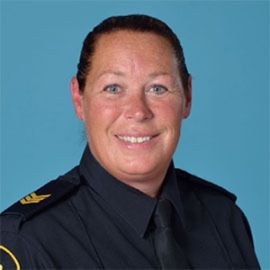 An undergraduate student at Wilfrid Laurier University and acting detachment commander with the Ontario Provincial Police (OPP) has won the 2020 Ontario Women in Law Enforcement Award for Excellence in Performance.

Jennifer Neamtz, a student in the online Bachelor of Arts in Policing program, was recognized by the provincial association for the creation and implementation of a community response unit and related programming that led to a significant reduction in the number of suicide occurrences in an Indigenous community in northern Ontario.

“She has changed lives by recognizing a significant need in her community and working with a team to transform her vision into results.”

The award was granted by Ontario Women in Law Enforcement (OWLE), an organization that brings together female members of law enforcement to encourage, promote and advance women in the field across the province of Ontario. Its annual awards are aimed at recognizing the outstanding achievements of its members.

“Jennifer embodies the morals, values, commitment and selflessness that our Advisory Council found impressive and deserving of recognition,” says Kimberley O’Toole, president of OWLE. “She has changed lives by recognizing a significant need in her community and working with a team to transform her vision into results.”

Neamtz has 15 years of service with the OPP and is the current acting detachment commander in Pikangikum First Nation. The remote fly-in community, located in the Kenora District of Ontario, holds one of the highest suicide rates per capita in Canada.

In response to this crisis, Neamtz has spent the last two years leading the development and implementation of a community response unit comprised of police, mental health workers and Pikangikum community members.

“The epitome of a healthy community is one where everyone can work together. We can thrive when every person – or every community – has a chance to be the best that they can be.”

The team collaborated on a plan to ensure that youth and adults in the community had access to the prevention, early intervention and harm-reduction services and information they needed.

“The program started as a way to give everyone in the community a voice and a space to communicate their needs to receptive support agencies,” says Neamtz. “We needed to react to their current needs and also be proactive in our approach, which meant reaching out regularly to develop strong community relationships built on trust and hope.”

Early in Neamtz’ community policing program planning, she invited a group of individuals including Pikangikum health and education professionals, Elders and community youth to meet to openly discuss their mental health, with a specific focus on situations where there was an acutely elevated risk of harm to an individual, family or the community.

“The epitome of a healthy community is one where everyone can work together,” says Neamtz. “It might start with one person, but it takes on a life of its own when it is embraced by everyone. We can thrive when every person – or every community – has a chance to be the best that they can be.”

Neamtz and her team used the information the community brought to the table to identify risk factors, beyond any one agency's scope, for a plan to build capacity across all relevant agencies. Each agency involved in the community response unit has mobilized its resources and strengths to promote wellness and wellbeing through community-based intervention strategies.

“This is literally a life-changing initiative for the community.”

“I am humbled by this award and by the strength, hope and resilience of the people of Pikangikum,” says Neamtz.

The community has seen a decline in their suicide rate. The number of suicide-related occurrences in Pikangikum has dropped 45.5 per cent from the number recorded in 2018.

“I’m certain that Jennifer never could have imagined that her outreach would impact people’s lives so profoundly and on such an intimate level,” says O’Toole. “Generations of families will now have a different path in life because of the outreach her team was able to provide.”

“This is literally a life-changing initiative for the community.”