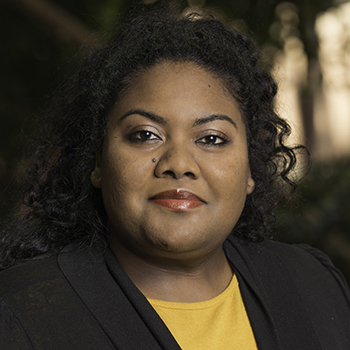 Ciann L. Wilson, associate professor in the Community Psychology program at Wilfrid Laurier University, has been awarded the Ontario Confederation of University Faculty Associations’ (OCUFA) 2020-21 Status of Women and Equity Award of Distinction. The award celebrates OCUFA members whose work has contributed meaningfully to the advancement of university faculty and staff who are Indigenous, women, racialized, LGBTQ2S+, living with disabilities and/or belong to other historically marginalized groups.

“Dr. Wilson’s leadership and service on issues of social justice, equity, diversity and inclusion are outstanding, both inside and outside of the university,” says Associate Professor of Youth and Children’s Studies Vanessa Oliver, who nominated Wilson for the award. “All of Dr. Wilson’s many research projects are community driven, community supportive and capacity building. Her teaching, research and mentorship cannot be separated from her vision of community transformation and racial justice.”

In addition to her role as co-director of the Laurier Centre for Community Research, Learning and Action, Wilson has dedicated herself to advancing equity, diversity and inclusion (EDI) efforts at Laurier and in the community at large. She serves on a university committee working to implement the federal government’s Dimensions EDI Charter and was recently appointed to the Region of Waterloo’s Anti-Racism Working Group.

“To be acknowledged as a Black woman scholar for my work in this area is significant,” says Wilson. “It is significant for the Black, Indigenous and racialized students, staff and faculty who understand deeply that this work is challenging, thankless, never-ending and exhausting, especially in spaces like the academy where there are so few of us to begin with."

“We cannot move past merely envisioning a university community that is inclusive of people from equity-seeking groups if we don't cultivate a learning and mentorship environment for these emerging scholars.” - Ciann Wilson

Oliver cites Wilson’s mentorship of BIPOC (Black, Indigenous and people of colour) students as “second to none,” saying that graduate students who often face systemic barriers have thrived under her guidance. Wilson has made it a priority to attract students who identify as queer, transgender, differently abled and/or BIPOC to her research program. She won the American Psychological Association’s Society for Community, Research and Action Ethnic and Minority Mentoring Award in 2019, an award for which she was nominated by her graduate students.

“We cannot move past merely envisioning a university community that is inclusive of people from equity-seeking groups if we don't cultivate a learning and mentorship environment for these emerging scholars who will form the workforce of tomorrow,” says Wilson.

“I am so happy to see Professor Wilson honoured for her substantial efforts,” says Jonathan Newman, Laurier’s vice-president: research. “She is deftly combining scholarship, advocacy and mentorship to not only identify historic and ongoing injustices, but to shape and implement tangible solutions.”

Wilson’s passion and resolve are fuelled by her own lived experiences as a university student.

“I was the Black girl who went through an entire undergraduate degree and didn't see a single instructor who reflected the communities I identified with or get assigned to read a single university-level journal article or book from a worldview that reflected my own,” she says. “This colonial education system did not teach me that the perspectives and knowledge of people who look like me have value, were responsible for building the first empires, universities and scientific disciplines known to mankind, and that the knowledge of my ancestors was exploited and misappropriated.

“Knowing that the work I do has significant implications for my communities and the people who come after me keeps me engaged and holds me accountable.”

“For every one of us who breaks through the glass ceiling of the Ivory Tower – it matters.” - Ciann Wilson

Wilson’s current research initiatives are focused on largely unexplored topics such as the histories and well-being of mixed Indigenous-Black communities in Canada, as well as evidence-based sexual health interventions for young Canadian Black women. She is co-leading the first national strategy to develop an ethics protocol for research, data collection and evaluation involving Black communities and co-editing a book that highlights the urgent need for such protocols in the age of big data, artificial intelligence and surveillance.

“Politically conscious Black, Indigenous and racialized people such as myself know that we don't have the luxury of only thinking about ourselves and our individualistic career and research empire-building projects,” says Wilson. “For every one of us who breaks through the glass ceiling of the Ivory Tower – it matters.”

The OCUFA will honour Wilson during a virtual ceremony on Saturday, Feb. 20, which will be attended by Newman and Laurier President and Vice-Chancellor Deborah MacLatchy.